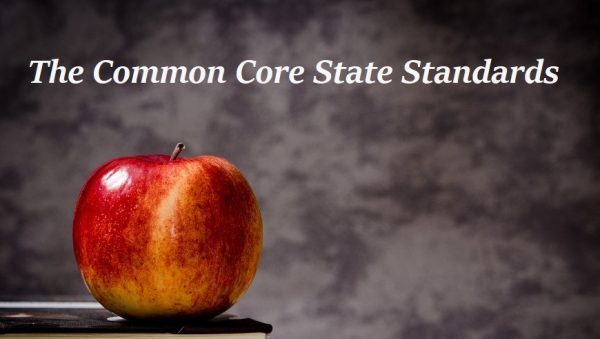 The Common Core State Standards (CCSS) are generic learning goals laid down by the California State Board, along with representatives from 48 states across the globe, all of whom were the members of the National Governors Association Center for Best Practices (NGA Center) and the Council of Chief State School Officers (CCSSO) at the time, to establish uniformity of learning objectives across the globe in 2009. The primary objective of the CCSS was to prepare students across the globe for their higher education. Since the education system differs from region to region, the CCSS ensures the achievement of basic learning goals for all the students, irrespective of where they come from, and puts them all on the same level of learning.

What Is Included in the Common Core State Standards?

This explicit set of college- and career-ready standards provide guidelines for the course content for kindergarten through 12th grade in English Language Arts/Literacy and Mathematics. The objective of proposing the CCSS was to establish standardized eligibility criteria for higher education.

Additionally, one of the distinguishing features of the Common Core is that unlike the previous state standards, which varied from state to state, Common Core establishes a healthy collaboration between different states on a variety of tools and schemes. These include:

The actual implementation of this set of standards has been fraught with lawsuits, protests, and political debates. To say that a move to completely restructure the American Schooling system has been divisive is an understatement.

You may also like If SEL in Schools is a Product, Then it Needs a Technology and Marketing Upgrade.

However, presently, forty-two states, the District of Columbia, four territories, and the Department Defense Education Activity (DoDEA) have adopted the Common Core State Standards. Initially, its implementation in various states started quickly, but it eventually lost momentum. Also, a minimum of 12 states introduced legislation that prohibited its implementation. 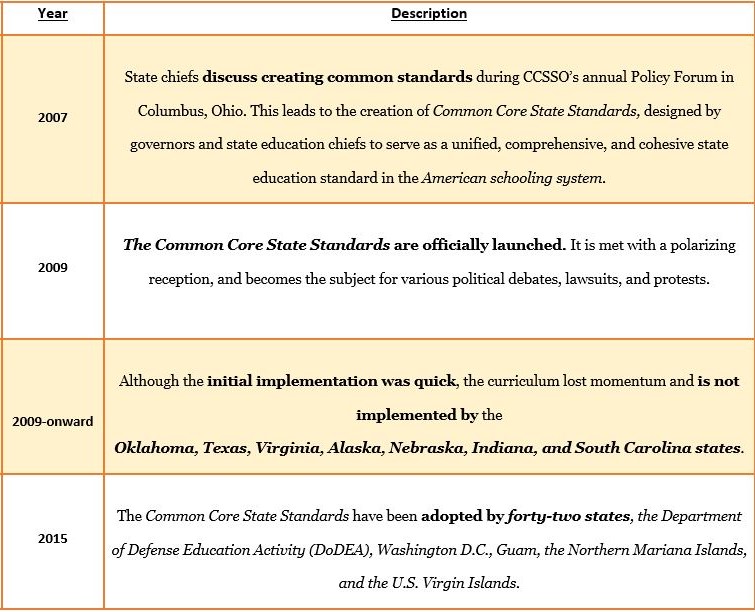 There was a collective call to establish national standards when a report in 2004, titled Ready or Not: Creating a High School Diploma That Counts, discovered that the expectations of colleges and employees from high school students are higher than before.

The American Diploma Project (launched by Achieve, Inc.) published this report. It identified a misalignment between the various tests that a student takes throughout the course of their education. This also includes the tests that the students take during their eventual employment/higher studies.

The report goes on to identify the major hurdle that the American school system is facing. It states that high school graduates do not have the skills and knowledge required for flourishing in college or a profession.

Also like to read about How to Make Higher Education Equitable and More Affordable?

According to the report, the value of a high school diploma is severely diminished. This is because the graduates cannot successfully compete beyond high school. As a response to this problem, the report recommended establishing a nationwide set of rigorous standards.

The mathematical standards entail the knowledge and skills crucial for students to be ready for higher studies, profession, and life. It focuses on a clear group of mathematics skills and concepts. Moreover, they encourage students to work on and solve real-world issues. Additionally, the stated aim of this standard is to achieve greater focus and coherence in the curriculum.

The first step in devising the standards was research-based learning progressions. These detail the current information about how a student’s mathematical knowledge, skill, and understanding develop over time.

The Common Core Math Standards strive to provide clarity and specificity as they ignore open guidelines leading to ambiguity as much as possible. The conceptual understanding of crucial ideas was not the sole focus of these guidelines. Consistently coming back to organizing principles, such as place value and the laws of arithmetic to shape those ideas, also plays a major role in these standards.

The Common Core State Standards specify the framework for English Language Arts (ELA). Also, the guidelines for literacy in history/social studies, technical subjects, and science are included in CCSS.

The students of this century should learn to read, write, speak, listen, and use language effectively in a plethora of content areas. So, to prepare high school students for higher studies and careers, the standards promote the necessary literacy skills and concepts.

The teaching imparted under the Common Core prepares high school students for life outside school. This includes inculcating critical-thinking skills as well as the ability to meticulously read texts such that it helps them understand and enjoy complex works of literature.

Students also learn cogent reasoning and evidence-gathering skills. These are crucial for success in higher studies, employment, and life. The aim of the standards is to produce a truly “literate” person of the 21st century.

Read the full “Ready or Not” report here.