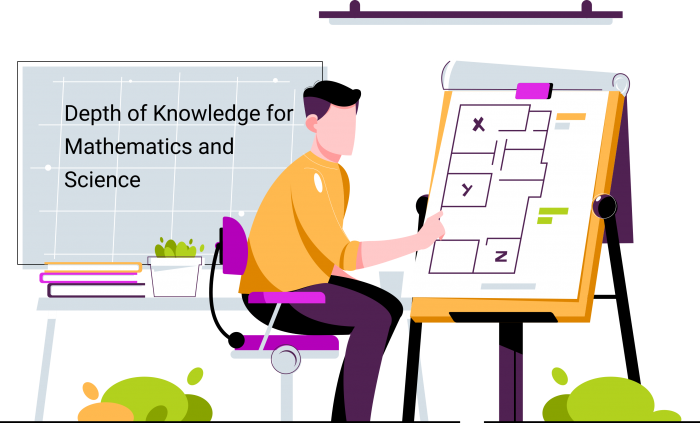 Depth of Knowledge for Mathematics and Science

Norman L. Webb first developed the Depth of Knowledge Framework for Mathematics and Science. He experimented with the model in his classroom and undertook his research based on the results and observations. As he was a mathematics educator, his framework originally reflected his results in the assessment of mathematics and science. It was only later on, with the vast application of DOK, that the framework was taken as a generic module for the levels of assessment. Over time, educationists have developed subject-specific DOK frameworks; however, the most essential and widely used still remain the DOK for Mathematics and Science. 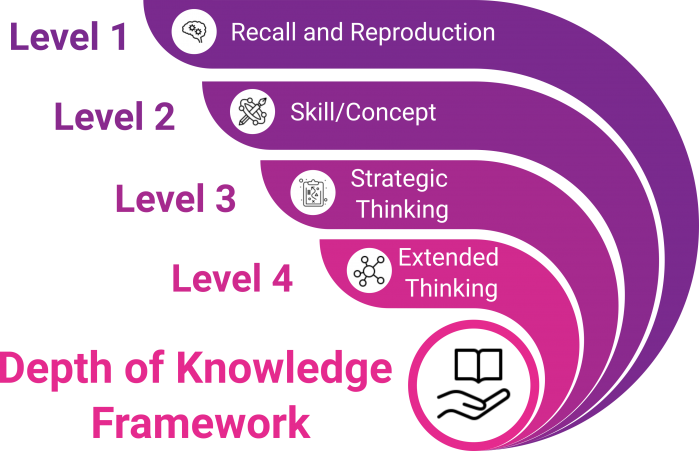 Depth of Knowledge Framework for Mathematics

In mathematics, the first level of DOK entails problems that are clearly defined and use a one-step, straight algorithmic procedure, or solving basic calculation problems that require a single step (addition, subtraction, et al.). The Recall and Reproduction level does not require the student to delve deep into identifying the operations required to solve the problem. Keywords that signify Level 1 Depth of Knowledge in mathematics are “identify”, “recall”, “measure”, “recognize”, and “use”.

The second level of DOK involves making the best suitable choice to solve the problem. The student is required to make some decisions as to how to best approach the problem and to contrast as well as compare concepts. “Estimate”, “organize”, “make observations”, “classify”, “compare data”, and “collect and display data” are keywords of this level.

The activities at the third level of DOK typically require the student to explain their thinking as well as logic and make conjectures. “Explain and support with evidence”, “draw conclusions from the observations”, “explain the phenomena in terms of concepts”, and “cite the appropriate evidence and develop a logical argument for the concept” represent the keywords for this Depth of Knowledge level.

The fourth level of DOK requires the learner to create multiple connections and relate within and among the applicable content areas to select the best approach to solve the problem. The keywords of Level 4 Mathematics Depth of Knowledge are “Create and carry out experiments”, “combine and synthesize ideas into concepts”, and “critique the experimental design”.

Depth of Knowledge Framework for Science

In science, “knowledge” can refer to content knowledge as well as knowledge of processes.

Simple science procedures/processes and a distinct series of steps are performed in Level 1 of Depth of Knowledge Framework for Science. Some examples that represent a few Level 1 tasks include the following:

Problems that contain keywords like “classify”, “estimate”, “organize”, “make observations”, et al. and require multiple steps for solving are classified under this level.

The solutions of tasks classified within this level require an explanation not only of the conclusion reached but of the logic and reasoning for the appropriate answer. A few Level 3 tasks include the following:

Tasks at this level are complicated and cognizance-intensive. They require complex reasoning, experimental design, and planning and may very well be performed over a period of time. Examples include:

For more information relating to Depth of Knowledge, refer this comprehensive post at Teach thought and Webb’s original research paper.