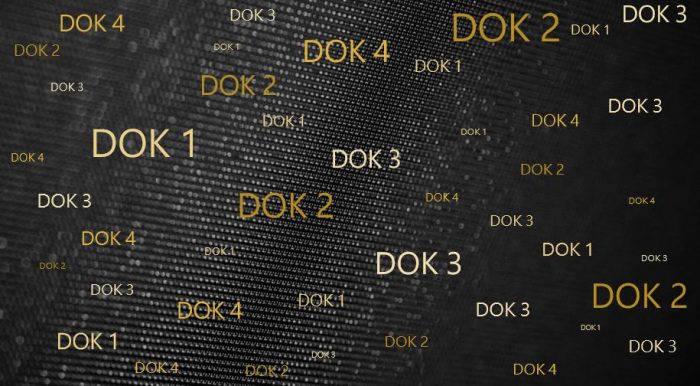 These example Depth of Knowledge questions are listed in increasing order of difficulty. Following this pattern, you can develop your own questions based on the subject and the student’s proficiency.

Q1. Which theory has most prominently predicted the existence of the long-sought Higgs boson particle?

Q2. What is the most thermodynamically stable form of carbon?

Q3. Define the function of ATP molecules in Prokaryotes.

Q4. What is psychological reactance? Explain with the help of an example

Q5. Who composed the original draft of the US Declaration of Independence?

Q1. What would be the effect on the age of the universe if the Hubble constant is doubled?

Q2. Organize the following elements in increasing order of electronegativity:

Q3. State the differences between polar and nonpolar regulatory molecules based on location and action mechanism.

Q4.What is practical intelligence according to the Triarchic theory of intelligence? Cite relevant sources.

Q5. Read the passage given in the box and use context to identify the meaning of the following words and phrases:

Q1. What evidence supports the theory that the satellites of Saturn once showed internal activity?

Q2. Analyze the chemical formula of barium and bromine ions with reference to the periodic table and ionic charge.

Q4. What do the investigations of the research regarding the effectiveness of avoidant and approach coping strategies suggest? Provide sources that substantiate your answer.

Q5. Beowulf is considered one of the most simple yet most intricate works of literature. Every story has a unique reader-narrator relationship. The narrator’s voice directs the reader’s focus and understanding. Analyze the relationship between Beowulf’s narrator and the story.

Q1. Is deep space exploration a crucial undertaking for the human race? Gather information that justifies your choice.

Q2. In its current state, is the upgrading of biomass by means of cyclic adsorption processes a judicious method for producing the remarkable, renewable source of energy – biogas? Answer with reference to current research into alternative biomass upgrading processes.

Q3. What facts can you collate from various sources to prove that Darwinism is an accurate theory?

Q4. If the Milgram experiment, 1963 was to be conducted today, what would the findings suggest? Would they be the same? Different? Substantiate your reasoning with relevant sources.

Q5. In what ways do you think the milieu of millennials differs from that of Generation X? Explain with proper citations and research that validates your conclusions. (graphs/charts/tables).

Visit our blog for further reading about ELA and Science DOK standards.

Chegg Revenue Rise After an Abysmal Plummet of Stocks in 2021: What Could It Mean for the Education Industry?