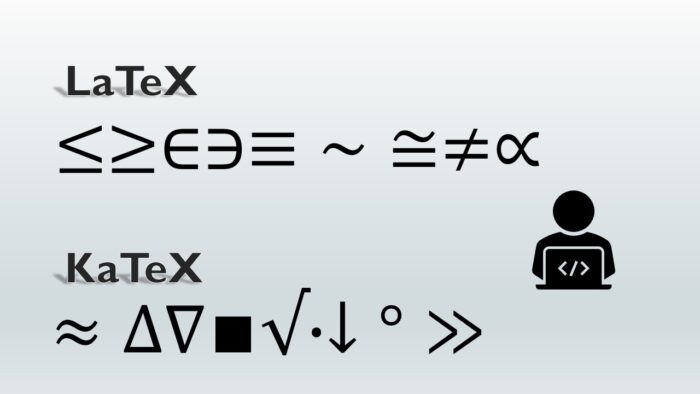 Challenges in writing Math for the web – using LaTeX and KaTeX

Almost every academician has acquaintance with LaTeX and KaTeX because they are the most commonly used tools when writing for publications, journals, or preparing any other document that requires the usage of mathematical symbols, calculations, or any technical expression.

When it comes to technical writing or documenting scientific papers, the content contains texts but there is also a frequent requirement of using mathematical symbols, formulae, or equations. TeX accomplishes this because it is a typesetting system for digital use that enables the utilization of mathematical notations, logos, or equations. TeX constitutes the shapes of symbols and letters and their writing mannerisms.

LaTeX is a typesetting system that was built so that we could create technical documents and include in them mathematical equations, statistical calculations, or scientific formulae used in subjects like astronomy, computer science, physics, etc. LaTeX helps researchers and academicians to write content in TeX language, which is then rendered into a format like the one we see in books or journals.

KaTeX is a modified version inspired by LaTeX typesetting developed by the Khan Academy. Although both LaTeX and KaTeX are writing languages based on the TeX typeset, they also have contrasting features.

Benefits of using KaTeX and LaTeX

With the advent of educational technology, online content production has increased multi-folds. Students and teachers are now dependent on online study material, which often obviates the need for taking physical classes. Ed-tech has made learning so simple and accessible that it is already making space in the indexes of future chapters.

With the increase in usage of digital learning, the need to write digital content in all subjects has increased, which elongates the relevance of KaTeX and LaTeX systems. Some advantages of using these documenting typesets are given below:

· LaTeX and KaTeX are a complete package system, through which one can write and prepare a document in any subject and then save it in a .pdf extension.

· LaTeX contains the ability to create documents with multiple types of mathematical symbols or calculations. With LaTeX, there is no need to focus on editing documents because it takes care of the margin editing, the citations editing, or heading and subheadings when code conversion into a textual format occurs.

· KaTeX works faster than LaTeX rendering and can independently embed itself on all types of platforms or any website. Any browser can use the KaTeX typesetting, and it would render similar results, making it widely and practically usable.

Is KaTeX better than LaTeX?

There is no space for complacency in technology. There will always be newer versions of technology depending on the industry’s needs.

LaTeX is more enhanced in function, and KaTeX is faster. There is no one way to conclude which one is better because both are popular among academicians. One can compare both as per user discretion, but there is no single winner.

Since KaTeX is faster and less complex, it has gained wider acceptance throughout the world of technical writers and in the Ed-Tech industry, which is why I tend to extract the major concerns that a KaTeX user faces when they are solving mathematical problems.

Neither adaption to the technology nor the usage of KaTeX is free from challenges. Content writers or other users of typesetting, such as students, have faced particular difficulties while operating the TeX writing systems. The points highlighting some of the issues that come as disadvantages for the technical writers using KaTeX are given below:

·  Learning to use KaTex takes time because it is not as simple as a document-creating system like Microsoft Word. In MS Word, we only type the content, and it is produced just as it is written. In a KaTeX, the writing part is different, similar to coding, then there is processing, and the rendered document is different.

·  Rendering KaTeX documents is slightly challenging as it throws errors (coding-related issues) when rendering a document, which can be time-consuming.

·  A preview of the processed KaTeX codes is not available on some KaTeX applications, making it challenging to make changes to the code if the need arises.

·  There are some exceptions in KaTeX, because of which improper alignments and errors appear while rendering certain code. For instance, while creating long divisions in Math.

·  KaTeX coding is quite sensitive, just like any other coding language, and it often delivers errors on minor syntactical mistakes while using some KaTeX tools instead of showing previews so that the user can make corrections.

How is Evelyn responding to KaTeX concerns?

Developers at Evelyn have come up with an application called Auto-KaTeX, a faster KaTeX rendering tool that does not face the concerns experienced with other KaTeX tools.

Some of the concerns addressed by the Auto-KaTeX application are described below:

·     Evelyn’s Auto-KaTeX tool fixes the KaTeX code entered so as to correct the alignment and other issues while rendering KaTeX, such as for long-division problems. It fixes common errors like occurring unwanted symbols, alignment issues, or brackets and renders the code correctly.

The Auto-KaTeX application is used to process all types of KaTeX codes, and these processed codes are compatible with all the authoring platforms and websites.

The Auto-KaTeX application shows the previews of the rendered code, which helps the user analyze the mistakes before they can be used on the authoring platforms.

The Auto-KaTeX application also displays an alternate form of the same input code in the ‘Alternates’ text area, even in cases where the ‘Generated AT code’ does not work on a client tool or LMS. This could happen for various reasons depending on which platform and rendering agent is being used to render the KaTeX code. For instance, there may be rendering agents that want the entire code in one single line.

Using the Auto-KaTeX, one can copy inline and block copy without modifying the code, saving time.

LaTeX and KaTeX are the go-to systems for document preparation because of their easy accessibility, wide acceptance, and text and symbol facilitative features. LaTeX is complex but broader in scope, whereas KaTeX is faster and more effortless. For this reason, the latter is more attractive for users in the Ed-Tech industry. Nevertheless, while using specific KaTeX tools, some challenges remain in the use of mathematical symbols and numerical calculations.

Evelyn has endeavored to create Auto-KaTeX as an alternative to those existing platforms that delivered different errors in their outputs. Evelyn developed the Auto-KaTeX tool to give a smooth writing experience to the content developers and high-quality content for viewing and learning to the content consumers.